35% of all Germans would be willing to pay for a guarantee that their data is being used according to their wishes and not for profit without consent according to a study of the German Institute for Trust and Security on the Internet (DIVSI). And there would be even more, but many think even though they would pay it cannot be guaranteed that their data is not misused. The average payment would be 41 Euro which results in the sum of 900 million. 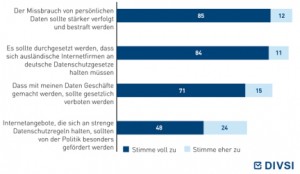 The chart shows that 85% think that the misuse of personal data should be followed and prosecuted harder and 84% want that foreign Internet companies have to comply to German laws. Thus, the European Data Protection reform is definitely overdue.

This site uses Akismet to reduce spam. Learn how your comment data is processed.